(ANTIGONISH, NOVA SCOTIA) – The Town of Antigonish and the Municipality of the County of Antigonish have released the What We Heard Report, a summary document from the extensive community engagement sessions that details the key themes and discussions around exploration of consolidation. The release of the report comes one year after both Councils voted unanimously to explore consolidation.

Brighter Community Planning and Consulting was the successful firm hired to lead the Town and County through the community engagement process. The process involved 24 sessions, which included in person and online meetings. The What We Heard Report is a key piece of information Councils were looking for as part of their overall decision-making process. The purpose of the report was not to measure who was for or against consolidation, but to capture the overarching themes of the discussions that took place as part of the community engagement.

“The engagement sessions were an opportunity to inform the public on why consolidation is being considered as an option and to better understand potential impacts consolidation may have on residents, businesses and the overall community,” said Owen McCarron, Warden, Municipality of the County of Antigonish. “We heard from thousands of people and these interactions have told us what is most important to them. Those themes include maintaining fair taxation, high service quality, and our community identity.”

“Both municipalities have witnessed the benefits of working together on important initiatives in recent years including economic development, active transportation, physician retention and emergency management as well as collaborating on large events and new attractions such as the National Special Olympics and the construction of the Antigonish Skatepark,” said Laurie Boucher, Mayor, Town of Antigonish. “Currently our staff, at a number of levels within our organizations, work hand in hand, which is fantastic, and it results in great events and initiatives for the community. We also see this as an opportunity to take a closer look at the levels of duplication to see where expertise could be focused in a wider range of areas to better serve the community. We believe it’s good practice to explore this opportunity now to allow us to continue to build a stronger Antigonish for all.” 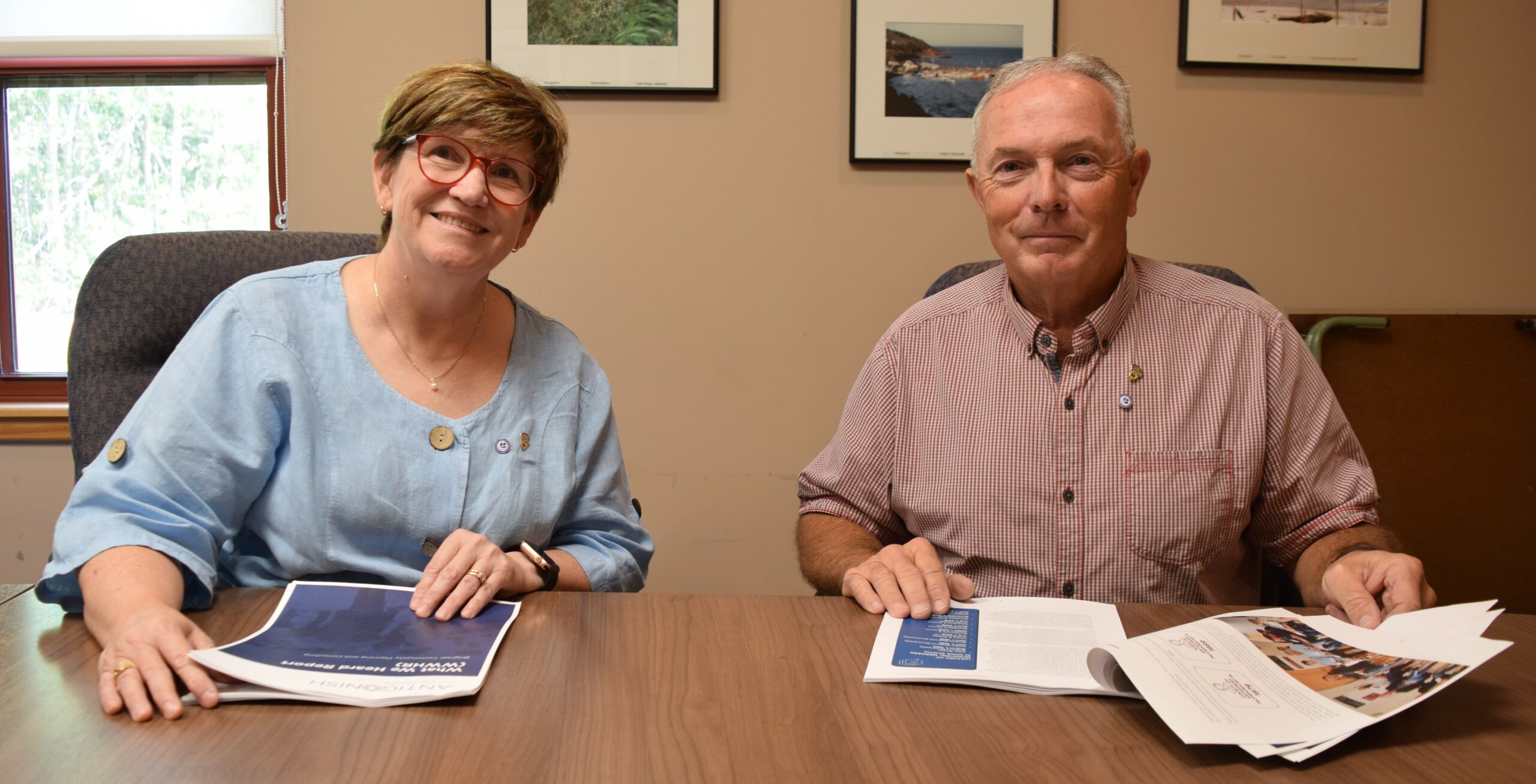 Mayor Boucher and Warden McCarron with the What We Heard Report

While no engagement process is ever perfect, the Town and County made efforts to take stakeholder feedback into account and adjusted its approach early on to allow for greater dialogue. Along with the engagement sessions, two community mailouts were sent to almost 10,000 households. A special phone line was also created along with a designated website and email address where 170 messages were received and an online discussion tool also received almost 2,000 unique visitors and more than 3,000 total visits.

“At the end of the day, I feel confident that we did our absolute best and engaged the community in a thorough consultation process that provided residents ample opportunity to share concerns, learn, and provide feedback that will ultimately help Council come to a final decision later this fall. We did listen to feedback and adapted the format of our sessions to include more question and answer rather than one on one conversation. We also listened to the community and have slowed the process down to take all aspects into consideration” added McCarron.

The Town and County issued a joint release earlier this week announcing that if Councils decide to move forward, the consolidated municipal unit would be legally called the Municipality of the County of Antigonish to avoid $1 million in additional policing costs. All other aspects of consolidation would remain the same. A new organizational structure would be created in a partnership of equals between the Town & County. Council’s guiding principles, including valuing staff from both organizations, would be the driving force behind the creation of a consolidated municipal unit.

The public will have the opportunity to comment on the What We Heard Report until September 29, 2022 at 4 p.m. The Report is available online at www.antigonish.ca and hard copies are also available at both the County and Town office, People’s Place Library and local councillors will have copies. Residents are encouraged to read the report and provide feedback if there is anything they feel was missed. This is an opportunity for the community to review and assess if any of their concerns or questions were not included in the summary and provide feedback.

If anyone feels their perspective was not captured or there is a major theme missing, they are welcome to submit their feedback via email to info@antigonish.ca, phone 1-833-563-2786, or drop off their written submission to the Town or County offices.

It is expected that Councils will make the decision on whether to move forward with consolidation or not this fall.

For more information on the exploration of consolidation, please visit www.antigonish.ca

Shirlyn Donovan
Municipality of the County of Antigonish
902-863-1117
shirlyn.donovan@antigonishcounty.ns.ca

Town and County provide update on policing as part of the exploration of consolidation.

(ANTIGONISH, NOVA SCOTIA) – As the Town and County of Antigonish prepare to share feedback received during its public engagement sessions almost one year after both councils voted unanimously to explore consolidation, they are providing information on what they have learned regarding policing contracts in a consolidated municipal unit.

The public engagement held in the spring was aimed at gathering input to better understand the opportunities and concerns of residents, businesses, and the overall community if the Town and County consolidates. Throughout the engagement sessions, both the County and Town acknowledged the potential for consolidation to change the costs associated with their respective policing contracts. As a result, staff have been working diligently with provincial and federal government partners to better understand the options before Council makes their final decision.

When consolidation was first reviewed by Councils, it involved the dissolution of the Town and County and the creation of a consolidated municipality. Further engagement with the provincial and federal governments, as well as independent legal counsel, identified that a new municipality would require a new contract for RCMP services which would result in additional costs with no changes to the level of service for the Antigonish area. However, using the same collaborative consolidation process but dissolving the Town of Antigonish, and retaining the legal name of the Municipality of the County of Antigonish would eliminate the need for a new contract and avoid approximately $1 million in additional costs per year.

“At the end of the day, whether you currently live in the Town or County, we all call Antigonish home,” said Laurie Boucher, Mayor, Town of Antigonish. “The way to move forward and avoid the increase in costs is to dissolve the Town and simultaneously restructure the County where the two units enter as equal partners to create a consolidated organization.”

“The goal when reviewing the option for consolidation is to determine if the residents, businesses and the overall community would be better served by one municipal unit while also creating efficiencies therefore, we need to avoid any unnecessary costs in the process,” said Owen McCarron, Warden, County of the Municipality of Antigonish. “Our goal is, and has always been, to build a stronger Antigonish for all.”

If both Councils decide to move forward, the consolidated municipal unit would be legally called the Municipality of the County of Antigonish. All other aspects of consolidation would remain the same. A new organizational structure would be created in partnership between the existing municipalities, and Council’s guiding principles, including valuing staff from both organizations, would be the driving force behind the creation of a consolidated municipal unit.

“Based on what was presented to us by our government partners and legal counsel, it is as simple as a name to avoid a significant unnecessary increase in policing costs. The Town will always be the Town and our history will remain strong and proud, that I know for sure. If we move forward, we are doing it together, to build a stronger Antigonish as partners with equal opportunities,” said Boucher.

The Town and County are committed to keeping the community updated on progress and information gathered as Councils assess the consolidation opportunity. The public engagement findings will be released later this week in a What We Heard Report that will be available for comment until September 29th. Councils are preparing to vote on whether to consolidate this fall.

For more information on the exploration of consolidation, please visit www.antigonish.ca

Shirlyn Donovan
Municipality of the County of Antigonish
902-863-1117
shirlyn.donovan@antigonishcounty.ns.ca