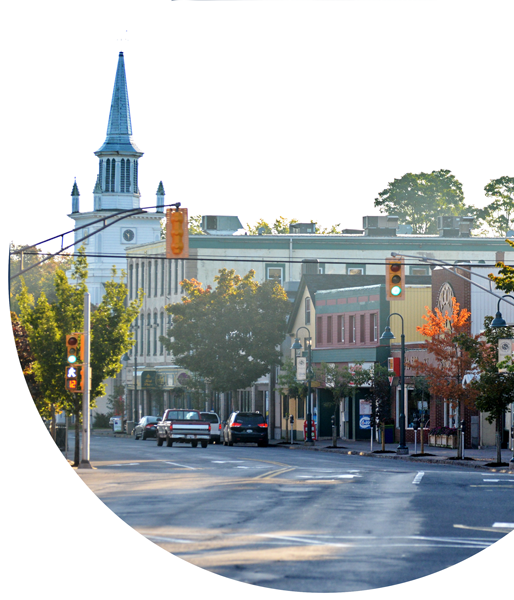 A Letter to the Community

At two Special Council meetings held on October 20, 2022, the Town of Antigonish and the Municipality of the County of Antigonish voted to move forward with consolidation.

We understand and respect the varying views, differences of opinion and strong emotions some residents feel with respect to consolidation. However, we feel obliged to speak up concerning the disrespect, taunting, intimidation and threats shown towards several Town & County Councillors, Warden McCarron, and especially Mayor Boucher.

Mayor Boucher, in particular, has been experiencing personal attacks, anonymous voicemails, and defamatory social media comments, some of which have been reported to the RCMP. This is bullying plain and simple and does not reflect who we are as a community. We can vigorously disagree, but no matter the issue it is not ok to name call, demean and threaten.

This is unacceptable behaviour and deeply troubling. As CAOs for the Town and County, we are asking this small group of residents to stop with the harassment. We are asking the rest of our community not to condone this harassment. The decision to move forward with special legislation for consolidation was not made lightly, and it was a decision made by both Councils, not one individual person.

We are not discouraging public discourse, but it is our duty to create a safe space for discussion and debate and we ask all residents, before you post a comment, send an email or pick-up the phone, please remember, these are real people, your friends and neighbours, who are receiving it on the other end.

Glenn Horne
CAO
Municipality of the County of Antigonish

What We Heard Report

The Town and County of Antigonish have released the What We Heard Report, a summary document from the extensive community engagement sessions that details the key themes and discussions around the exploration of consolidation. The purpose of the report was not to measure who was for or against consolidation, but to capture the overarching themes of the discussions that took place as part of the community engagement.

To try to answer that question, this past Spring, Town and County Councils hosted a series of more than 20 public engagement sessions throughout the Town and County as well as virtually. A special phone line, email, and online engagement portal were also set up to received feedback. All of the feedback gathered through the various forms of engagement have been reviewed and compiled into the What We Heard Report.

This purpose of the engagement was to listen to residents, to hear their concerns and learn about opportunities in relation to consolidation. The report has been written by Brighter Community Planning and Consulting and presented to both Town and County Councils.

Residents are encouraged to read the report and provide feedback if there is anything they feel was missed. The purpose of this opportunity for feedback is for the community to review and assess if any of their concerns or questions were not included in the summary. If anyone feels their perspective was not captured or there is a major theme missing, they are welcome to submit their feedback via email to info@antigonish.ca, phone 1-833-563-2786 or drop off a written submission to the Town or County Offices.

Town and County Councils wish to take this opportunity to thank residents for coming out and providing their feedback.

The following reports have been prepared to provide more information in regards to the exploration of consolidation:

Presenting to Councils the What We Heard Report

What We Heard Report open for public feedback, copies will be available online and will be accessible at other locations around the Town and County

Final WWHR and other documents will be made available to Councils to facilitate a decision on whether or not to move forward with consolidation. 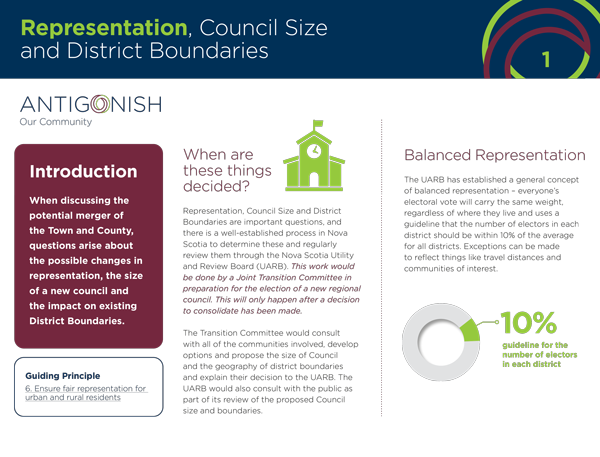 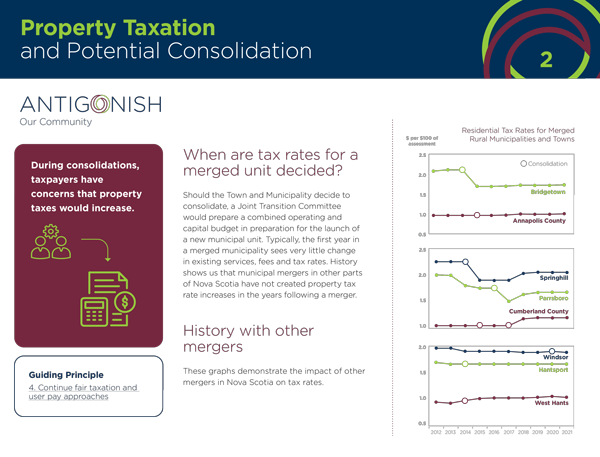 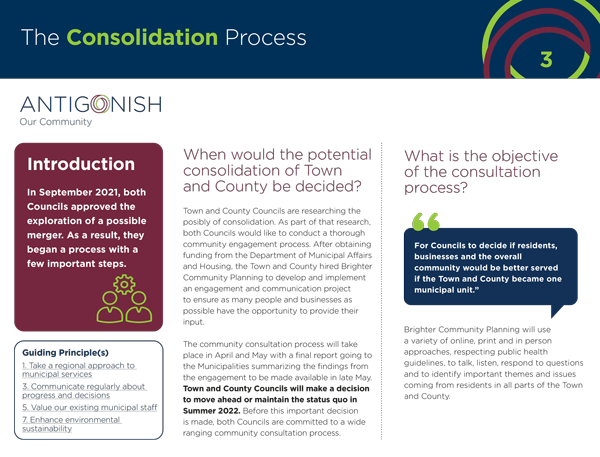 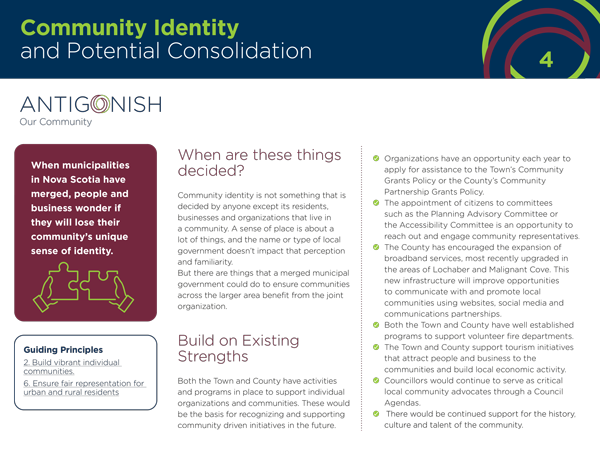 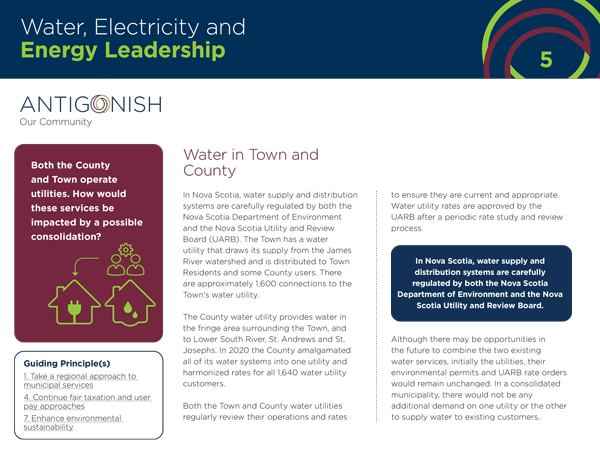 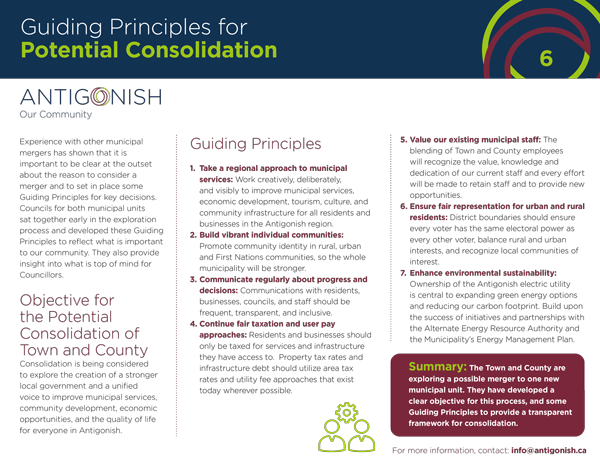 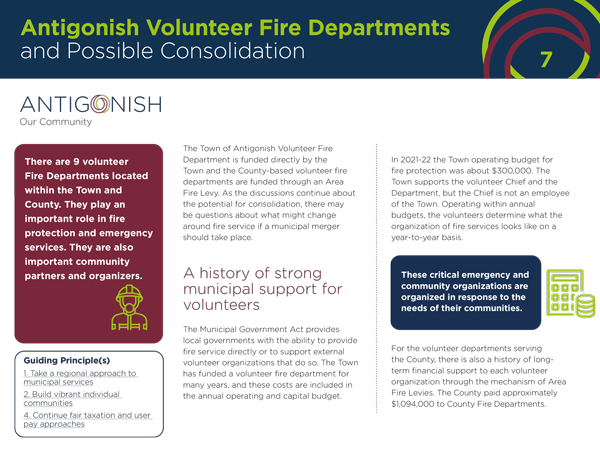 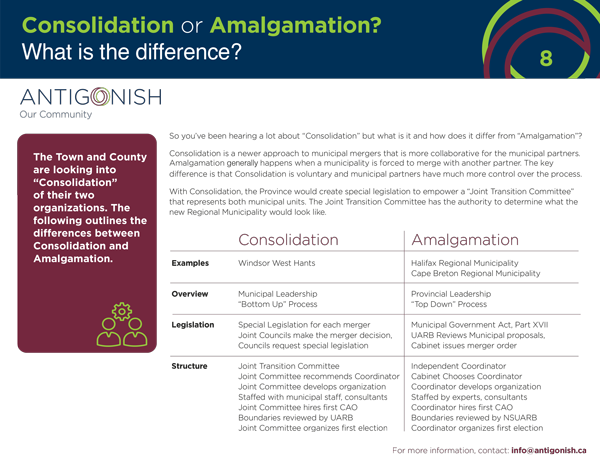 Consolidation or Amalgamation? What is the difference?